Concepts in Synthetic Biology: Cures in the Cloud 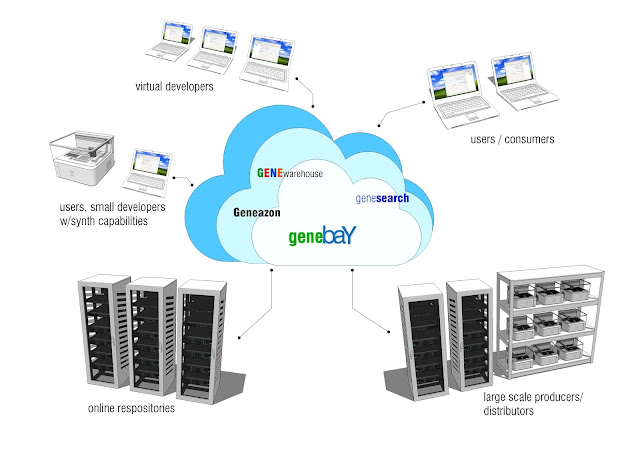 August 18, 2014 - What if getting medication and therapies could be done through the "cloud?" What if you could get online, search for and acquire the sequences of gene therapies that you could have synthesized and sent to you, or even downloaded and synthesized at home? New business models abound, as well as the ability to leverage open source concepts to lower or eliminate medication costs.

For designers of 3D models, common objects used repeatedly in projects are kept in private libraries, and for design firms, in a local directory accessible by all staff. Google's SketchUp created the 3D Warehouse where all SketchUp users freely share their models and components, creating a global 3D model directory. As hobbyist 3D printing grows, similar repositories are being created for 3D models that can be downloaded for free and printed at home. There's the free Thingiverse by the creators of MakerBot, and the monetized Shapeways.com online store, for example.

If we were to make a composite of these emerging concepts and apply them to synthetic biology, and the possibility of a market of therapies, drugs, and medications, what might it look like?

We could imagine individual open source and monetary projects put online for users to access, download, or have synthesized and shipped to them. We can imagine large scale producers who churn out popular synBio products, therapies, and medications which are sold through online retailers like a synBio "Amazon.com." There might even be a "geneBay" of sorts that rates reputable synBio developers who have decided to monetize their creations.

Then there would be open source repositories like SketchUp's 3D Warehouse or MakerBot's Thingiverse. People could download the genetic sequences and either synthesize them themselves at home with a DNA printer, or have them synthesized by the previously conceptualized "ReGen Center."

The first things most people might say is, "what about quality?"

For sites like Thingiverse, there are comment sections and forums for feedback and rating models. Here you will find people working out any problems models may have, and helping others who may have run into trouble while trying to print their own. In SketchUp's 3D Warehouse there is also a rating system, distinguishing the quality and popularity of uploaded models. Users can also leave comments which is helpful when problems are found. For websites like eBay, there are more rigorous means of establishing the reputation of credible and reliable retailers from those who you may not want to associate with.

We could imagine similar systems put in place to ensure transparency and encourage collaboration so that users can discern the quality of what they are about to synthesize or put into their bodies. Local brick-and-mortar pharmacies equipped for the synthetic biology revolution could help, and eventually we will see diagnostic tools on the user's end that can run simulations on virtual or physical samples of a would-be patient with an acquired therapy before taking it.

What needs to be done...

A desktop DNA printer would be nice, so would some decent bioCAD tools. Work is already being done on both of these. There's also the need for some models of just how to start up independent, open source gene therapy production -- because currently gene therapy is handled by universities and hospitals under trial conditions and with teams of extremely well-funded, specialized doctors.

There is at least a partial template in the works we can look at -- Andrew Hessel's "Pink Army Cooperative." It is described best by Hessel in a 2011 Wired article...


Then it hit me. What if, using synthetic biology, we made drugs for just one person at a time? Fully individualized (n=1) medicines? Done open source and virtually, the overheads would be very low. Large manufacturing plants wouldn‘t be necessary. Best of all, the cost and complexity of clinical trials would be reduced, potentially saving years of time and massive amounts of money.

Set up as a cooperative, and with people paying in and sharing whatever breakthroughs, progress, or results they may have, the Pink Army Cooperative seeks to begin producing therapies tailored to individuals.

Multiplying examples like the Pink Army Cooperative will eventually produce a large and continuously growing amount of synBio components. Even if a therapy is custom-tailored to an individual, there will be basic components that can be reused. Organizing these in the cloud will be an important step in developing synthetic biology as a complete ecosystem.

Considering the success of those behind sites like eBay, or tools like SketchUp or MakerBot, it would seem like a good idea for entrepreneurs to begin looking into how synthetic biology will find its way into the cloud and how people will access it and even synthesize it at home.