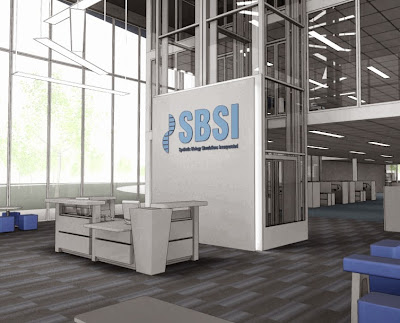 August 13, 2014 - Synthetic Biology Simulation Incorporated (SBSI) is a fictional institution exploring what a future may look like when we gain a good enough understanding of DNA and how to manipulate it. One day we will be able to create entirely synthetic life, from bacteria up to and including animals like livestock and novel creations for entertainment, studies, and completely engineered ecosystems.

A better understanding of genes not only allows us to manipulate them better in a lab, but gives us the ability to create better simulations. Genetic simulations, a computer model that tells us the characteristics of a particular genetic code and how it might respond to a given environment or stimuli can be used as is to test a single organism, or run simulations on entire lineages of selectively (or randomly) bred organisms. What would normally take nature or breeders hundreds, thousands, or millions of years to accomplish, can be done at the speed of our fastest processors.


While actual selective breeding takes a long time, and at any given time you only have specimens with one set of characteristics to study, simulations can allow us to develop several lineages in parallel. Along the timeline of any given lineage, several versions of a particular species can be synthesized in the lab and compared in parallel, first-hand.

This is where an institution like SBSI would come in, doing both of these for clients. Safely handling synthesized life, keeping it in and other contaminants out, would require a specialized skill set and customized facilities where a good track record would be important.

We could imagine that in the future nearly anyone would be able to create and contain synthetic organisms of any size, however, larger facilities like SBSI's not only would allow large specimens to be contained, but could be used to study entire engineered ecosystems.

Instead of just a miniature elephant breed, perhaps there would be a whole list of interdependent, specially synthesized organisms that were being developed for a particular climate or environment. These could be tested together at a facility like SBSI.

In the future humans may eventually begin building larger, torus shaped space habitats with large, permanent populations. Gravity may or may not be similar to that on Earth, depending on the centripetal forces able to be achieved by the habitat's rotation. Lighting conditions may also vary. Engineering ecosystems better suited to the atmospheric, gravitational, and lighting conditions that would exist there could be the key to making these habitats more livable and self-sustaining.