September 15, 2014 Not much about the business model of car manufacturing has changed since Henry Ford began using the assembly line to crank out Model-T's a century ago. The process is an elaborate, capital intensive endeavor that requires constant market expansion to sustain itself, and barring that, the merger of auto companies into bigger and ever more ungainly monopolies. The result is a very impersonal product with limited options, designed, produced, and distributed from a centralized network of manufacturers and suppliers. It is a process driven by profits rather than advancing the realm of transportation, unless on the rare occasion profitability and advancement coincide.

While there is much criticism that could fill the next several paragraphs regarding the auto industry, we could just as easily say that without this long and difficult learning process and the innovations it has produced, we would not be here today ready to take the next step forward.

Customization has always been an integral part of car culture. Hot rods and racing have more than anything besides the auto industry itself, laid the foundation for the DIY auto revolution. As after-market parts become more popular and more business big and small set up to supply them to consumers, the natural evolution of more efficient and cheaper manufacturing processes are developed. Automated and computer controlled machining and now 3D printing has also spread across the custom car (and motorcycle) community.The ability to use a single machine to create an infinite number of variations to wheel hubs for example, on a water jet cutter, antiquates assembly lines producing a limited number of variations for consumers to choose from.

Soon, as the tools for computer aided manufacturing become simple and cheap enough for anyone to use, producers and consumers will merge as one, and we have some good examples of people working toward this end to take stock of here and now.

Local Motors is currently at the forefront of DIY car manufacturing. Everything from crowdsourcing designs, to its decentralized microfactory concept, to its most recent project, a 3D printed car, has challenged the old paradigm of massive factories pumping out identical models that change only superficially year to year. It is shifting that old paradigm from consumerism toward a future where everyone is involved in production, from designing to manufacturing.

Local Motors describes its microfactory concept as "a local factory created to design, build, and sell vehicle products from Local Motors and [its] partners. The Microfactory is where the Rally Fighters, as well as the Racer and the Cruiser, are designed and built. It includes a large build floor to accommodate participants in the Rally Fighter Build Program, a space for research and development, and an LM Labs area."

The design of the Rally Fighter was determined by crowdsourced competition, and is built in microfactories with customers having an opportunity to help assemble it themselves. The Rally Fighter can also be purchased as a kit. While it is still out of reach for the average driver in need of a ride, the business model that Local Motors is pioneering may eventually open the door to local auto manufacturing that is within reach. 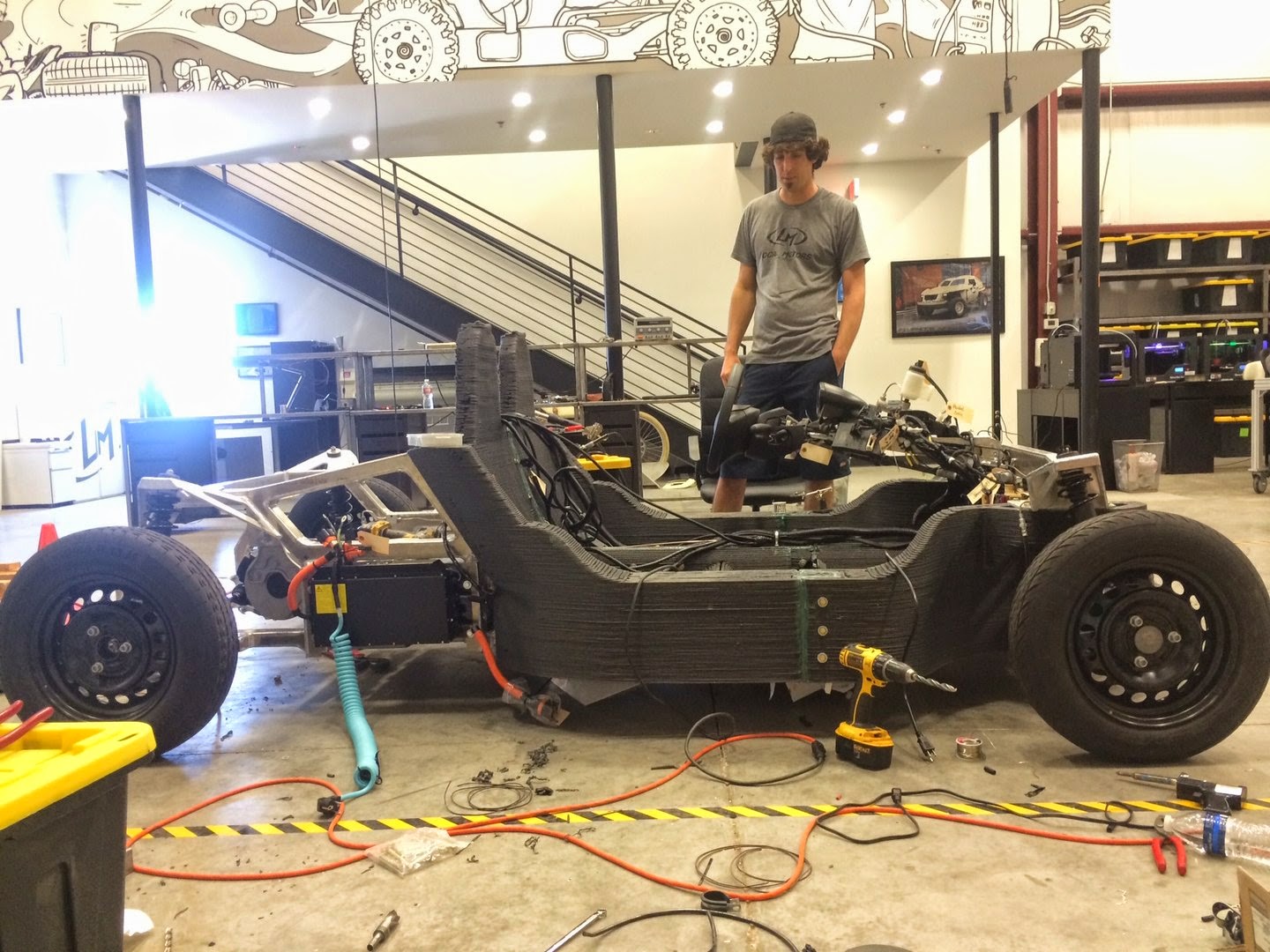 The barriers that need to be broken before communities can begin building vehicles (and other currently mass produced items) are those of manufacturing technology. Sourcing building material, the machines required to process and shape it, and finally construct it into a final product are still highly specialized and require at the very least a local "microfactory." But what if we could have a garage sized 3D printer capable of building objects in a variety of materials, including metal, and up to and including the size of an object that could fit in a garage (like a car)?

Local Motors' latest project, a 3D printed car, is blazing the trail toward this goal. Of course, many of the parts in the 3D printed car are not printed. But the use of 3D printing in any stage of manufacturing brings automaking one step out of the factory, and one step closer to makerspaces in our communities around the world. While Local Motors is working on this project, makerspaces around the world are experimenting with 3D printing technology to make everything from electric circuits to metal and ceramic objects. This combined crowdsourced research and development process may be disorganized, but it is definitely moving us in the right direction.

What Can You Do Today?

It's simple. Go to your local makerspace/hackerspace and start connecting with people. You will find people skilled in nearly every discipline regarding design and engineering there, and they are more than happy to pass their knowledge on to others. Alternatively, you can teach yourself design online with an almost inexhaustible number of resources tailored to every possible personality type from those that love to immerse themselves in theory, to those who must learn through project-oriented video tutorials.

At the very least, with minimal effort, the average person can get involved in designing and brainstorming projects others can pick up and run with. At the most, you can begin working on a project or a method that could lead to personal factories on your block turning out highly customized, superior automobiles that suit each driver precisely and incorporate innovations we have all dreamed about but have never seen realized because of the current centralized business model our rides come from.

The future is what we make it, literally, with our own two hands, and that includes the future of automobiles and personal transportation.