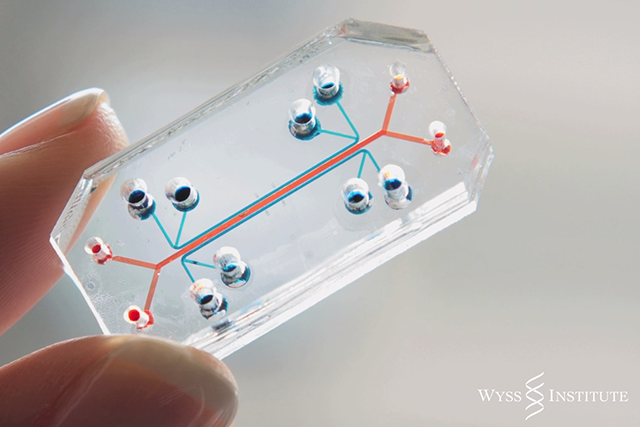 January 20, 2015 - BIT Magazine Geraldine Hamilton, a PhD in cell biology/toxicology, presented before an audience what Harvard's Wyss Institute calls an "organ on a chip." The chip contains a collection of human cells making up a small microcosm of any number of human organs. The chip Hamilton presented before the audience in particular contained cells from a human lung. Together the cells exhibit many behaviors and characteristics they would normally have as part of an entire lung within the human body.

The chip was developed as a means to test potential therapies and pharmaceuticals. Currently, testing is done in animal models which is still an important step, but leaves much left to discover and overcome in bridging the gap between animal models and human patients. Additionally, testing is done on human cells grown in labs upon Petri dishes. Not only are these cells difficult to maintain under such conditions, the cells alone do not function in Petri dishes as they would in the human body. After such testing, there is still years of difficult clinical trials to pass.

The chips developed by the Wyss Institute help overcome these challenges, and because it is much like testing on an actual human subject, research and development can be fast-tracked, allowing clinical trials to begin sooner and in turn, beneficial therapies to be deliveries to patients in need sooner.

But there is another aspect of an "organ on a chip" that presents a meaningful breakthrough for medical research -- the fact that this organ can be created using cells from an actual, living patient. This means that the development of a therapy would not just be fast tracked to be tested on human patients in general, but a specific human patient in particular.

This breakthrough is particularly meaningful in terms of what is known as "gene therapy," where a patient's DNA is examined, altered, reintroduced, and replicated with critical corrections or enhancements made by doctors. Gene therapy is effective against any number of conditions, from congenial genetic disorders where missing DNA can now be replaced and replicated throughout a patient's body, to literally curing cancer by re-engineering a patient's immune system to recognize and destroy cancer cells.

The most impressive feature of gene therapy is the fact that it often requires only a single injection. Corrected DNA reintroduced into the body using reprogrammed viruses is then replicated by the body's natural processes. Patients who have successfully been treated by Penn Medicine researchers  for certain types of blood cancers have been in persistent remission ever since. What should be noted is that these patients were all certainly to die had this revolutionary new treatment not been administered.

However, developing such therapies is difficult because they must be tailored to specific genetic conditions and even specific patients. With your body's characteristics reproduced on a chip where they can be experimented on without risk to your own health and well-being, radical treatments can not only be developed specifically for you, but done so quicker than traditional methods allow.

In the future, where local clinics might extract DNA, examine it, formulate a therapy, and administer it to patients for everything from cancer to regenerative medicine, having the ability to test it on the actual patient without endangering them would require such chips as developed by the Wyss Institute. Thus, another critical piece has fallen into place, bringing the state of future medicine into sharper focus.

For the growing DIYbio movement, it is quite obvious that human, or even animal testing would pose a myriad of ethical, legal, and logistical challenges. Putting human and animal biological systems on a chip where neither animal nor human is endangered, would open the door to more meaningful and impactful research from the DIYbio community.