May 31, 2015 -- BIT Magazine Another impressive and very successful post-3D printing process seen in action recently at Maker Zoo Bangkok is friction welding. This is the process of spinning a piece of PLA plastic filament while pressing it along a joint, creating highly localized heat and fusing both the filament and the two work pieces together. 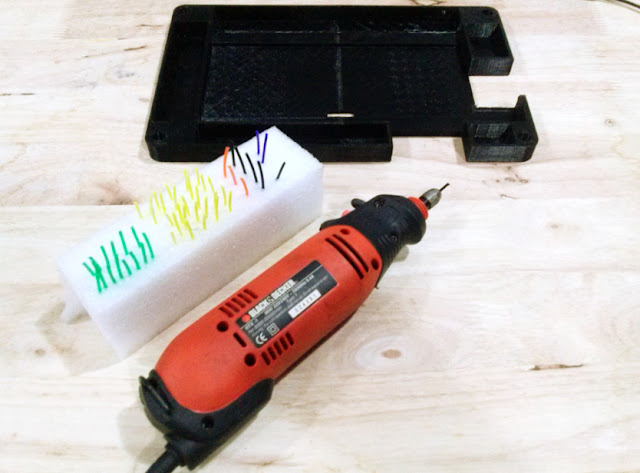 It takes some practice and anyone who has investigated actual metal welding will know there is quite a lot of variables and factors that contribute to a successful or unsuccessful weld. But with practice, you can create a consistent, uniform, and relatively smooth joint that will hold two pieces together at least as strong as if it was printed.

The first successful project we've seen this used for besides several very strong test pieces, was a tablet PC enclosure meant to mount the tablet on a wall as part of a commercial console. The enclosure came in two pieces, but were far too large to print on the MakerBot Replicator 2s at Maker Zoo. So it was decided that they would be printed in four pieces, each half now divided in two down the center.

Using friction welding, the two halves were assembled. The top cover was a mere 2mm thick and the weld (applied to both sides of the seam) was strong enough to connect the two pieces and held up to hours of handling while it was being sanded down (another technique for another article). If the weld fills up the seam completely, sanding it down is possible. However, sanding it near the seam alone will create an inconsistent surface finish, requiring you to sand the entire model for a consistent look.

When is Friction Welding Useful?

Friction welding is great for connecting pieces together forming an object that on its own is too big to print at one go. Friction welding is also perfect when designing prototypes, and when support needs to be added to strengthen the inner surface of an enclosure, or when a compartment or feature needs to be added in but there is no time to print an entirely new piece.

If done properly, you will have a noticeable but neat seam. It is stronger than glue and because you are using the same exact filament you used to print the piece in the first place, (though you could use a different color if you wanted), it will blend in nicely.

How Do You Friction Weld PLA Plastic?

Make Magazine and Hackaday, among others, have both introduced this method. The short version is:


1. You need a rotary tool like a Dremel and a collet (the metal piece that holds the drill bits and cutting wheels for a Dremel-like rotary tool) that holds your filament tightly.

2. Wear safety glasses and be aware of your surroundings, because the filament will inevitably break and shoot out from the work area.

3. Apply slight pressure and hold the filament in one place until it begins to melt (you must get a feel for this), then slowly and consistently move it down the seam applying even pressure. If you want to get really fancy, try moving the spinning, melting filament in small circles down the seam, fusing more material together over a wider area around the joint.

The Make article has a lot more information and details, including strategies for making a simple weld even stronger by creating a v-channel allowing for multiple layers of welds to be made over a single joint.

So grab a rotary tool, your safety glasses, and all those filament segments laying around you can't use for printing, and start practicing today. Eventually, you will open the door to larger projects you wouldn't have wanted to do before with glue, but can now thanks to friction welding.