May 7, 2015 -- BIT Magazine It's been recently reported that the 3D printer manufacturer MakerBot slashed its workforce, closed shops, and has undergone an overall downsizing. Owed primarily to overextending itself, some analysts have also speculated that another contributing factor to MakerBot's recent setbacks may be setbacks for 3D printing altogether. 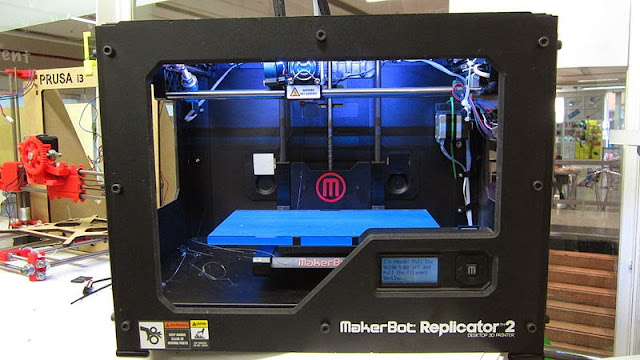 They claim that the technology simply isn't profitable nor is it capable of producing quality just yet that is profitable. The UK Register published two pieces, Makerbot axes 'scores of staff' – 3D printing just doesn't pay the bills and Why MakerBot failed – but 3D printing is far from dead reflecting some of these sentiments as well as giving the full background of MakerBot's recent troubles.

There may be some truth to this, but MakerBot's real problem might not be the shortcomings of 3D printing technology, nor the technology's inability to make profits. The real problem may stem from the fact that MakerBot is trying to become the very sort of inflexible, traditional business model that 3D printing itself is in the process of disrupting.


MakerBot Wants to be the Very Business 3D Printing is Disrupting

One of 3D printing's greatest strengths is in prototyping. You can literally design, print, test, and redesign parts multiple times in one day. Such a process might have taken weeks or months using traditional fabrication processes. And a lot of the printing and testing taking place in product labs today simply couldn't be done in the past, and surely not for as cheap as 3D printing affords.

This breakneck pace product development is accelerating towards has an impact on 3D printing systems themselves. 3D printers can be modified, improved and even used to make parts for their future successors. To take maximum advantage of such a capability organizations must be more than flexible ... they must become water, freely flowing. They also must become goal oriented, not simply chasing profits and perpetual expansion.

Makerspaces represent such organizations. They are able to pursue multiple avenues simultaneously, focusing on education, product development, R&D, and even media to make ends meet, exploit opportunities, accomplish specific goals, all while turning a profit. When one area of focus leads to a dead end, resources can quickly be allocated elsewhere. Core members of a space's leadership often have multidisciplinary talents that can be applied to a wide range of productive activity.

And in fact, it was in this sort of environment MakerBot's success began. And from there, it became a highly influential player in open source and 3D printing fields as well as a cultural leader among the maker movement. It was building value you can't quite put on a quarterly report, but value nonetheless.

However, MakerBot decided to try and cash in that value, going proprietary and attempting to build a traditional business model built on constant expansion of an increasingly inflexible product line. That profit still seems to be a cart put before a horse, with schemes to fill every school with their 3D printers an afterthought simply to push the cart forward. That is precisely the sort of thinking and business model that hindered design and development in the past, and precisely the sort of business model 3D printing itself is now disrupting.

The Big Guys are Still Useful

While MakerBot and other large players in the 3D printing industry are unpopular among diehard open source hardware, software, and 3D printing users, their contributions both positive and negative are still immeasurably valuable. They set standards that only proprietary traditional business models could afford to set, but that open source alternatives are capable of eventually matching and outdoing. Their efforts also introduce new people to the world of 3D printing in ways many makers and hackers simply aren't interested in doing.

They push the envelop of what is possible with the large sums of cash investors bring in, showing us what is possible and how we might follow with open source alternatives. In all, the competition they bring, no matter how sustainable their business models may or may not be, forces those among open source to adapt, change, and move forward out of what might become comfortable complacency. Sometimes, these larger players even inspire us. Take their annual trade shows and the processes they showcase there.

MakerBot may still thrive. It will either have to scale back its ambitions and accept a more sustainable but slower pace of growth, or look toward an alternative business model to pursue. Repositioning itself back as leader in open source 3D printing may not be as profitable as what it had hoped to accomplish before this latest downsizing, but it is probably more sustainable, more secure, and may produce opportunities its current business model is incapable of making use of.

If not, others are waiting to take its place, including open source alternatives that have watched and learned from MakerBot's mistakes. Hopefully, chief among those mistakes, the open source community has learned that being an open source and maker cultural leader has a value you cannot and maybe should not cash in for a chance to become like the very businesses open source has set out as an alternative to in the first place.

But that's just how we see it. What do you think?