Going from Consumer to Producer

May 14, 2015 -- BIT Magazine Consuming seems like a natural thing to many. We are born and raised in increasingly consumerist societies no matter where we live. The idea of "doing something yourself" strikes some as a shabby alternative to the super-sleek status symbols and ultra convenient prepackaged everything waiting on the shelves for us.


However, at the same time, perhaps paradoxically, many of us feel there is something fundamentally wrong with this sort of society and in particular the dependency and sometimes outright laziness and ignorance bred by consumerism.

For instance, how many people truly know where their food, clothing, or technology really comes from or how? How many even care?


The resurgence of "DIY" under the new term "maker movement" and the advent and increasing popularity of personal manufacturing reflects a sort of backlash against this. It is a sometimes unconscious or semi-conscious attempt to rebalance our lives and our communities and take a little bit back for ourselves. Whether out of curiosity of how things work, or because we have a problem we want to solve ourselves because consumerism hasn't found it profitable to fix, doing it ourselves is becoming an increasingly attractive alternative to many for a variety of reasons. 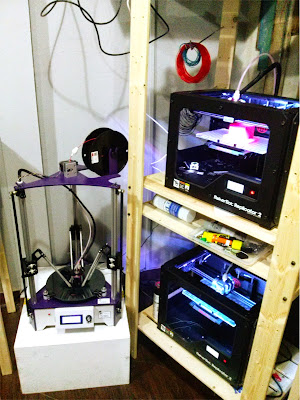 As a high school student I had little options open to me. I could end up deep in debt attending college or I could simply jump right into a menial job serving the consumerist paradigm. Instead, I decided to do neither of the above and leave the US altogether for Thailand. For years I struggled to find out what I really wanted to do. I had always been interested in technology and design, but believed I needed a degree in engineering to pursue either professionally.

I had begun teaching myself 3D design and in particular SketchUp, 3D Max, and anything else I could get my hands on. Out of all of them, only SketchUp appealed to me. I ended up going to Singapore for a year to work at a design school. Though my actual job was supposed to involve business administration, I ended up volunteering and working on several of the in-house design projects.

By literally just jumping right in and working alongside people with passion and experience I was faced with a sink or swim scenario and was forced to learn new skills at a breakneck pace. But learn I did and before long, I was able to professionally employ SketchUp to do nearly all aspects of the projects we were working on.

I did that for a few years but had my eyes on 3D printing and product design. A few freelance projects I worked on touched the borders of producing usable objects but it wasn't until makerspaces started popping up in Thailand that I began actually producing them myself.

Late last year, there were several makerspaces that had finally opened up in Bangkok. These were places you could go to get advice and use 3D printers to produce virtually anything your imagination could come up with. With New Year coming up fast, an aquaponics project I had set up required some means of feeding the fish while I was away. I had less than a week, no time to order a fish feeder online, and no where to buy one. I designed one in SketchUp, printed it out at a makerspace, and assembled and tested the necessary electronics for it in just 2-3 days.

Now I am regularly helping out at Bangkok's MakerZoo. Almost everyday I am involved in making things both for fun and education, but also for daily use. Many makerspaces also feature a "product lab" and 3D printing services. We host students working on biomedical devices, companies building their latest inventions or automated services, or art they simply want to print out and enjoy.


Many of these objects are prototypes that go on to become sleek and convenient devices, albeit produced on a small scale and highly customized.

As the technology and techniques improve, I find myself seeing not just a way of doing everything I see on the shelves in stores myself, but doing it better and more customized than any mass producer could accomplish.

If I Can Do It, Anyone Can Do It

Luckily for many people reading this, you probably already have a makerspace nearby, especially if you live in Europe or North America. Just type into your favorite search engine your town or a nearby city and the word "makerspace" or "hackerspace" and hit enter.

But even in Asia and Southeast Asia, these spaces are springing up everywhere. The people at makerspaces are enthusiastic and eager to help others discover and explore this new "maker movement" just as they once did.

Many of these makerspaces feature classes and workshops to teach you the skills you need to do 3D design, how to use a 3D printer, other forms of personal manufacturing, and even more traditional skills like sewing, metal and wood working and much more.

What is emerging is not just a means of making more "businesses" to contribute to consumerism, it is to transform society altogether from one of consumerism to one of being able to design and make almost anything.

If you ever wake up one day and feel like you are but human livestock munching fodder on a consumerist farm, then maybe it's time for you to make the leap from consumer to producer and see how the other half lives. And now there is a place to go to make this leap where others are willing and even eager to help you, at your local makerspace.