How Designing Space Colonies Can Help Us Here on Earth

May 20, 2015 -- BIT Magazine NASA recently announced a design challenge centered around the creation of a 3D printed deep space habitat. Part of NASA's Centennial Challenges program, the 3D Printed Habitat Challenge  (find the rules here (.pdf)) seeks to build resilient, flexible, and highly self-sustaining habitat for astronauts working in deep space. Requirements also include the need to use material found where the habitat will be constructed. If on the moon or Mars, the "printing process" will use the ground beneath it to construct it. 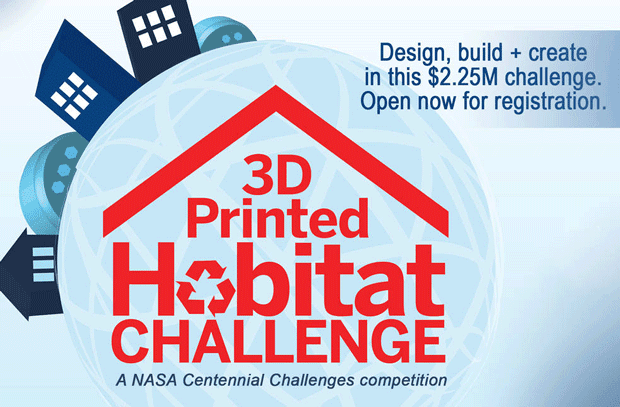 
The 3D-Printed Habitat Challenge seeks to develop the fundamental technologies necessary to manufacture an off-world habitat using mission recycled materials and/or local indigenous materials. The vision is that autonomous habitat manufacturing machines will someday be deployed to the Moon or Mars to construct shelters for human habitation.

On Earth these same habitat manufacturing capabilities could be used to produce housing wherever affordable housing is needed and access to conventional building materials and skills is limited. On Earth, it is envisioned that local indigenous materials (dirt, clay, sand, etc.) could be combined with readily available recyclable materials and used to construct semi-permanent shelters against environmental elements for human habitation.


Some might not fully understand the implications of designing such a habitat. However, a self-contained, self-sufficient environment, either on a city-scale or on the scale of an individual home and built from readily available local material, does more than enable us to colonize space. It allows us to better live upon the Earth too.


Infamous natural disasters, whether it was the tsunami that struck the Indian Ocean in 2004, the Fukushima disaster in 2011, or the most recent earthquakes in Nepal, have shown us the vulnerabilities of our current infrastructure and the follies of depending on highly centralized power, transportation, food and water solutions.

Could the thinking about habitats in space help us build better habitats here on Earth?

Homes as Prototypes for Space Colonies, And Vice Versa

There are few interesting ideas that come to mind when thinking about this challenge. First, is the fact that designing and building a space habitat outright may be prohibitively expensive, but building subsystems and prototypes on Earth could help gather information that could be used for space habitats. This is a process virtually anyone can contribute to. Whether it is refining indoor gardening, water generation and filtration, or other automated systems that could be used in space habitats small and large, the collective knowledge gathered by us here on Earth can one day be brought with us to the stars. And before that, it can be used to reduce our dependency on vulnerable centralized infrastructure here on Earth and make our communities more resilient to disasters man-made or other natural.


Likewise, the existing International Space Station (ISS) already serves as a prototype for long-term space habitats. It has been orbit and home to astronauts and cosmonauts for over 10 years. Everything learned and proven aboard ISS will inevitably be applied to future space habitats, but can also be used to make homes on Earth more self-contained, self-sufficient, both preventing adverse changes in the surrounding environment from disturbing those within, and protecting the surrounding environment in turn.

Thinking about it that way, we see that NASA's most recent design challenge doesn't just serve space exploration, it also serves us here on Earth. More resilient flexible, and highly self-sustaining habitats are what humanity needs to expand our reach beyond Earth, and more comfortably accommodate ourselves upon it.

Beyond the overview laid out by the competition, we could think of several systems that would be essential to make habitats here on Earth more resilient to environmental changes around it, and protect the environment around it from the activity taking place within it.


Air filtration could be a an area worked on by people worried about smog in cities, or even contamination from invasive species, both natural or genetically modified. Such systems could be outfitted on our homes, or adjoining agricultural space like a greenhouse or "green tunnel."

Water is another consideration. For the ISS, water must be brought to the station from Earth, and water used on the station is often recycled over and over again. For people on Earth, the moon, or Mars, there might be available forms of water either as ice, underground or in the air. Reclaiming water from the air, particularly in greenhouses or large enclosed habitats through atmospheric water generation could give people on Earth and off it another source of clean water when the weather won't cooperate, or when there is no weather at all.

Food is another absolute essential. Learning how to better grow food on Earth under artificial conditions, such as indoors, on rooftops, or in greenhouses, could give us more options when considering how to grow food within our space colonies. Not only that, the ability to grow food anywhere means we no longer have to depend on centralized producers who are often subjected to questionable standards, market fluctuations, and an overdependence on whatever the weather may be doing.

Finally, the architecture itself should be explored. For settlements off world, and homes here on Earth, creating strong shelters that can handle anything the environment can throw at it will be essential. Here on Earth, poorly constructed shelters can clearly be seen to have fatal and tragic consequences. Creating better, cheaper, easier methods of constructing stronger shelters, particularly by using indigenous materials, can save lives as well as improve them. The mastery of this technology on Earth will make it easier to replicate in more adverse conditions off it.

Of course, humanity must explore and it must expand. It has always done so, and to continue to exist it must continue to do so. The planet possesses finite space and finite resources. While technology can and has steadily stretched these finite resources to comfortably accommodate billions of people, eventually we must expand into space.

Furthermore, it is a matter of hedging our bets. The planet is fragile. Events on it and off it can jeopardize all life. Human beings are the only species with the ability to anticipate and avoid extinction level events. By colonizing space, and bringing with us the genetic heritage of the planet with us, including plants and animals, we ensure the survival of our planet's diversity regardless of what disasters may beset the planet itself.

Space habitats may be meager for many years to come, but the inevitability of constructing many of the mega-habitats already designed by NASA such as the Standford torus similar to the orbital habitat featured in the movie Elysium, means that eventually we will be able to replicate entire ecosystems beyond our planet. It is the ultimate insurance policy and by reaching for such a lofty goal, the technology necessary to do so, including advanced manufacturing and resource management, will vastly improve conditions for those living on Earth.

Already the impact of 3D printing, the technology prescribed by NASA for the construction of its future space habitats, is empowering people all over the world to do things traditional industry has failed to do. If we could employ personal manufacturing to build entire structures, how many more people would benefit?