June 20, 2015 -- BIT Magazine Bangkok-based makerspace Maker Zoo has among its collection of 3D printers an Ultimaker clone made here in Thailand called the ExtraBot. It is a solid 3D printer that gives the open source Ultimaker a good name. However, recently, it began having problems. Prints began to have gaps especially in places the filament would be halted as the printer made a series of quick moves. Usually during these moves, filament would continue to extrude. However it wasn't. 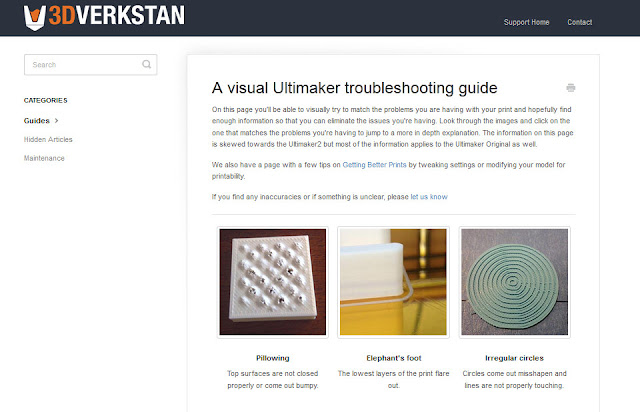 A quick look online found a webpage titled A visual Ultimaker troubleshooting guide, which immediately helped identify the problem and the solution. Apparently the Extrabot was underextruding, and among other solutions offered, was making sure there was no obstruction to the filament. Taking out the feed tube on the ExtraBot revealed a piece of filament so badly jammed inside it, a hole was bored through it by following filament creating an extremely narrow channel. Removing it immediately did the trick.

The great thing about the troubleshooting guide is that it identifies common problems just about any 3D printer might have during a failed print and shows you a picture of what they look like. And while the course of action might not be suitable for your 3D printer, at least you will know and more importantly see exactly what the problem is before you can go off to your printer's online forum or manual and find the solution.

To the user who created this guide (Robert from Sweden), and to those who have since contributed to it in forums and constantly link to this guide, thank you! If you've read our own  5 Tips on Getting Started with 3D Printing, this troubleshooting guide would be a great follow up.