July 10, 2015 -- BIT Magazine Increasingly, the world of 3D printing and open source software and hardware is making breakthroughs effecting an ever wider range of industries. One that is perhaps the most important, though we may not think about it until we fall ill or are injured, is healthcare. 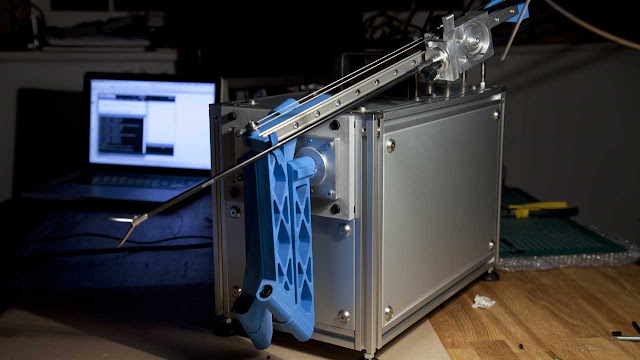 We've covered this topic in the past, in particular, efforts to use 3D printing and open source collaboration to produce low-cost, highly adaptable prosthetic limbs. We also talked about DIYbio and community laboratories that are already creating local infrastructure with both professionals and aspiring professionals that may someday be capable of performing diagnosis procedures and driving down dramatically the cost of healthcare.

3D Printing Industry in their article The Pirates Will See You Now: Open Source Surgery Bot Built to Drive Down Medical Costs, gives us a look further into this paradigm shift, with a project already well under way to create a low-cost surgery robot. These are machines that augment the skilled hands of a surgeon during an operation, performing precise movements to such a degree, that it limits the amount of trauma the patient experiences during a procedure. These machines already exist, and are immensely expensive. The open source alternative, Open Surgery, explores the possibilities of using the same sort of open source collaboration that made cheaper prosthetic limbs more accessible, to produce cheaper and more accessible alternatives to vastly more complex and expensive pieces of medical equipment.

Part technical challenge, and part public service message, Open Surgery ignites the imagination and the process of determining just how to produce cheaper alternatives to prohibitively expensive medical equipment, and how to either integrate it into our existing medical and healthcare infrastructure, or how to create a new form of infrastructure to leverage the advantages of open source technology to its maximum potential and benefit to society.

And while Open Surgery is still in the developmental stages, far from ready to work on its first patient, the fact that someone has a working prototype along with doctors and amateurs alike talking about just how to manage this apparently inevitable paradigm shift, is a big accomplishment.

Another area that seems to be being cordoned off by large corporations to maximize profits is gene therapy. The procedure required to develop and implement this revolutionary form of treatment which has literally defeated cancer and erased genetic conditions from patients, involves likewise specialized equipment produced by a handful of manufacturers at very high costs.

Among the tools used includes systems like General Electric's WAVE Bioreactors. Such a bioreactor includes linear motor rocking control systems, temperature control systems, and other microcontrollers performing automated tasks. Would it be difficult for a makerspace to create an open source version of such a system at a fraction of the cost?  And if the development of such a system was done in coordination with healthcare professionals seeking cheaper, customized, or even more effective alternatives, would the end result be far off if not equal to GE's system?

These are the questions Open Surgery has begun to answer. In Bangkok, Thailand, where BIT Magazine is based, local makerspace Maker Zoo is already in contact with local healthcare professionals and discussing the possibility of other programs like Open Surgery that may help serve as a model for others to follow in opening up accessibility to this equipment to those who can't afford it, and drive down costs for both doctors and patients alike.

And the beauty of local makerspaces working with local healthcare professionals is, the people directly involved in treating patients will have direct say in the features produced, not for maximizing profits, but maximizing performance. This is not to diminish the work of engineers, designers, and healthcare professionals who have brought biomedical technology to the level it is at today, this is simply to say now is a good time to take it to the next level.