August 27, 2015 | BIT Magazine MIT's Technology Review recently published a piece titled, New Boss on Construction Sites Is a Drone, which details the use of drones to track the progress of a project in  real time. At a construction site of a downtown stadium in Sacramento California, drones regularly patrol overhead, comparing the current state of the project with engineering plans for the site. Discrepancies in both structural elements and with the project's schedule can be detected and passed on to site managers. 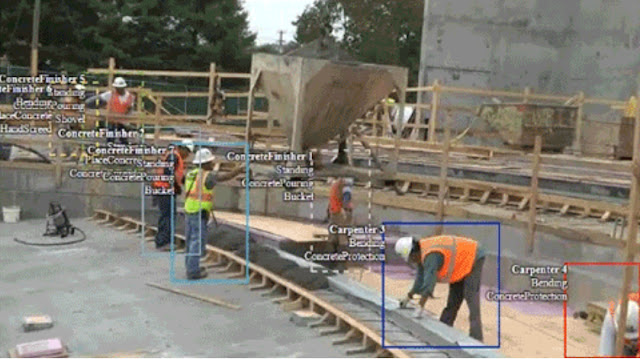 Additional surveillance being developed by the University of Illinois is described by Technology Review as follows...


The University of Illinois team is currently testing a system that will allow drones to attach cameras to locations across a building site, so that activity can be monitored continually. In experiments, they are also using a crowdsourcing platform to categorize workers’ activities in video footage. A manager can then see how different tasks are being performed overall, and how much time each individual is spending on a job.

In other words, each worker's activity is tracked, cataloged, and then categorized.  A looping animated GIF in the article shows what appears to be tracking software watching  every construction worker in the frame, categorizing their activity in real time.

An automated omniscient manager watching everything all the time may unsettle people. The potential to abuse this technology is immense. On the other hand there is no doubt that the information gathered by these systems could improve safety and efficiency. The real problem we will surely see in the future is all companies adopting this technology making it virtually impossible for people to choose whether to work for a company that employs this technology or not.

With its widespread use, there will be those who seek to abuse it. If it is inescapably used in every aspect of every industry, we can surely see sociological problems arising.

Something like this would be more suited for smaller companies consisting of teams rather than "employers" and "employees." This way, everyone can agree on whether or not to use such a technology, how it is used, and what is done with the information.

Like has been argued about the Internet of Things (IoT), if people are voluntarily creating and using the technology in localized networks where their data is safe and under their direct control, the potential good is unlimited. However if, also like IoT, attempts are made to centralize the technology, putting this information in "clouds" on the Internet, it will inevitably be abused and erode what little privacy and control individuals still maintain over their daily lives.

Building A Future That Can Accommodate Omni-Management
Instead of trying to prevent a future where this technology exists and is widely used, which is essentially impossible, people who rightly worry about its uses and abuses should begin building a future better able to accommodate it.

This would be a future where many of the companies that would seek to employ and impose this technology on armies of employees do not exist because they have been replaced by smaller firms comprised of teams built on cooperation rather than corporatism, and leveraging technology rather than labor. 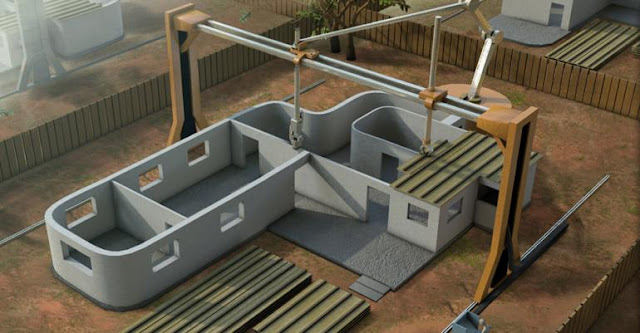 For construction specifically, local firms will eventually be employing on-site 3D printing and other automated construction processes eliminating the need for large numbers of workers and leaving only a small team of operators, designers, and  entrepreneurs. Automated management of the construction site through the use of drones then would make much more sense both ethically as well as in terms of boosting efficiency.

Imagine a future where every community had their own "construction firm" which consisted of a small team of designers and engineers that used 3D printing and other forms of automated construction to build structures. Imagine a similar scenario for other industries that currently employ large numbers of employees, like in factories. With these teams the need for these drones would be limited to monitoring a computer controlled "print" in progress rather than people and privacy concerns would be rendered moot.

And while people will rightfully be tempted and eventually compelled to protest this technology as it is developed and eventually employed, we must remember all the other forms of pervasive surveillance that came before it that have been protested, yet are now omnipresent in modern society.