September 9, 2015 | BIT Magazine An Italian team has created a complex of inflated underwater vegetable gardens. Each habitat consists of a rigid frame with an inflated, transparent membrane providing a small standing space and a perimeter lined with growing plants. The system receives sunlight through the surface of the ocean and water by condensation from the sea through natural evaporation.


The system may seem impractical to some, but the implications of the project and what it teaches us, whether it fails or succeeds, will reveal the limits we face on Earth and beyond, and perhaps how to go about overcoming them.

Their Kickstarter page contains a vast amount of information, photos, and videos describing both their current project, and the progress they've made since they started.

One of the central themes of humanity has always been exploration. Not only does this include charting new territory, but also being able to sustain civilization within it. From plains, to mountains, to coast, to desert, humanity has settled virtually ever climb and place on Earth.

Beyond that, humanity has also permanently occupied Earth orbit for years, first upon the Russian Mir space station, then on the International Space Station. 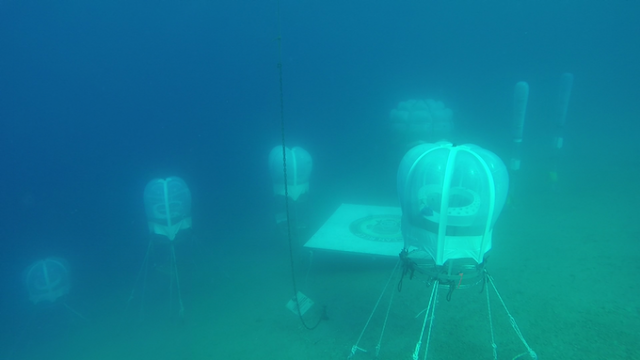 Beneath the waves in "inner-space" humans live and work on military and civilian submarines, as well as in underwater habitats like the Aquarius Reef Base used by NASA for its NEEMO (NASA Extreme Environment Mission Operations) program. But both in orbit and beneath the waves our foothold is tenuous at best. Absolutely everything we need must be brought with us.

In order to expand in either realm or go beyond, we must learn how to do what we do everywhere else; feed ourselves and find and exploit resources to build.

Projects like Nemo's Garden or various projects aimed at growing plants in orbit, have shown that it is at least possible. But in order for it to become sustainable, more experiments will be necessary.

Something like Nemo's Garden used to be the sort of project millionaires or the government would do. But with the decreasing costs of ever improving technology, increasing collaboration, and innovations like crowdfunding, more and more people are able to get directly involved in this sort of research.

We can hope that Nemo's Garden and work being done around the world by makers everywhere on "robotic gardens" and "food computers" continues to improve our ability to grow healthy, natural food, in anyplace we need giving us food security where we are now, and allowing us to bring that security with us anywhere we decide to go in the future.