Jumping into the Internet of Things

September 3, 2015 | BIT Magazine The buzz around IoT continues to grow as new companies and products attempt to exploit the dropping costs and increasing capabilities of electronics able to connect physical objects to the digital Internet. 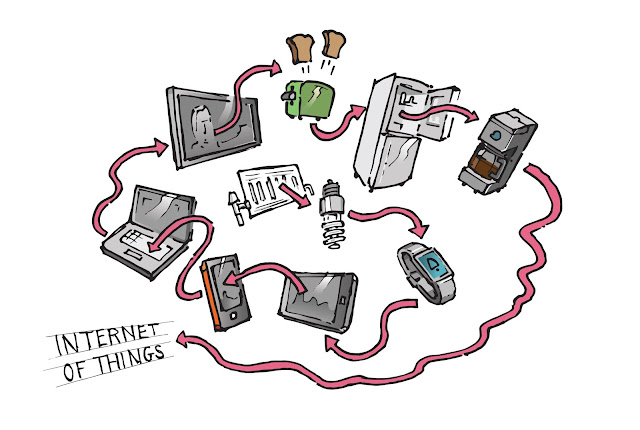 And while there are a lot of discussions online and off about the implications of connecting the physical world to the digital, during this particular technological leap forward, we don't have to be mere spectators.

Getting started on IoT is easier than it looks. During a recent workshop at Maker Zoo (a Bangkok-based makerspace), an IoT workshop was held to teach absolute beginners how to connect an electronics project to the Internet. Using the ESP8266 module, a programmable microcontroller with WiFi capabilities, and the online application Blynk, participants were able to control an LED with their smartphones in less than 3 hours.

The ESP8266 module used during the workshop had its limitations. Unlike the Arduino which it is compatible with, it cannot be easily connected to a computer to begin programming it. Instead, an adapter with a ribbon cable was needed to serve as an interface. As your projects get more advanced and you use more of the ESP8266's pins, you'll find yourself having to disconnect them to reprogram the board, then reconnect them to test your project.

But to show you just how fast IoT is advancing, a new Kickstarter campaign by Gravitech (makers of the Arduino Nano) featuring their TESPA IoT Development platform, includes a small ESP8266 board that connects directly to your computer like an Arduino. It uses the same programming language and development environment as Arduino but has all the added connectivity of the ESP8266.

In one year, we've heard about IoT, then tinkered with the original ESP8266 module, enjoyed the community's efforts to make it Arduino-compatible, and now in a few months will be holding in our hand a platform developed specifically for the maker community and as easy to use as the Arduino itself.

Honestly, using the original ESP8266 and other boards out there now is a bit daunting for absolute beginners. If you visit your local makerspace, surely someone will help you out. At Bangkok's Maker Zoo or at Gravitech's Home of Maker, workshops and meet ups teaching the basics and tinkering with IoT projects is becoming commonplace as it is at makerspaces around the world.

When Gravitech's TESPA platform comes out, it's a good bet a lot of tutorials online will follow. TESPA's ease of use and the torrent of knowledge that will be accompanied by the community that grows around its use will make the ESP8266 as easy to use for IoT as Arduino made microcontrollers.

Why is Easy Access to IoT Development Important?
We already almost intuitively understand the importance of computer literacy and the role of the Internet in connecting with other people, increasing productivity, spreading knowledge, and opening for ourselves new opportunities both personally and professionally. And just as we understand all the uses of the Internet, we also have begun to learn not only potential abuses of it, but how to defend against them.

When the physical world and Internet begin to blend together, many of the benefits the Internet already offers will carry over to the physical world. But with those benefits will come potential threats. If we understand the technology that will underpin this new world, and we are able to create the infrastructure around us that make up this new world, it will give us that much more potential to enjoy its benefits and also defend against its threats.

Personal manufacturing technology like 3D printing and open source electronics like the Arduino have made it possible for regular people to create extraordinary projects. These projects have not only given these people a sense of accomplishment, but in many cases these projects have solved a particular problem or have created a particular opportunity. Employees become entrepreneurs, and technological spectators and consumers become direct participants and producers.

Any project you can already automate with an Arduino or other microcontroller can now be connected to the Internet easier. This means that any project you set up at home, you can now have a window into no matter where on Earth you are so long as you have an Internet connection. But in addition to a window, IoT means you also have a bit of a doorway you can reach through and control your project as well. Beyond that, the information flowing on the Internet can be used by your physical object, and your physical object can likewise add to that flow of information.

An example being developed at Maker Zoo at the time of this writing was an automated irrigation system for your home garden. It uses a peristalic pump to move water from a container to your plants. You can program the ESP8266 module to water the plants for a pre-determined amount of time when you push a button. Or you can use the Blynk application on your smartphone and do it over the Internet, no matter how far you are to your garden. Blynk also allows you to set your system to a timer meaning you can water your plants everyday, at any time, and for any duration.

In the future such a system could also easily include a soil moisture sensor which could either prompt you to water your plants over the Internet or water them itself for you. Imagine if your garden outside was connected to weather information online, adding to it and adjusting automated parameters ahead of predicted changes in the weather.

There's also caring for pets, monitoring your home, turning on and off appliances before or after you leave your home, and even for aspiring DIYbiologists, there might be potential to design projects that allow you to carry out and monitor experiments remotely and to have them flowing information online in real time for others to help analyze.

The possibilities are endless and instead of waiting for companies to make these possibilities a reality in the future, development platforms like TESPA and others allow you yourself to make them a reality today. If you're interested in getting started with IoT and aren't sure where to start, check out your local makerspace, they will be happy to help.