November 10, 2015 | BIT Magazine Thailand's first DIYbio lab, F.Lab, is attempting to kickoff the DIYbio movement here in Bangkok. Through a collaboration with Bangkok-based makerspace Maker Zoo, it is already creating a series of DIY pieces of lab equipment. What F.Lab learns in the process might help others elsewhere in the world who are interested in DIYbio to start and equip their own labs as well.

The first item up is admittedly one of the easiest to make. And although it won't necessarily be used in any of the first protocols F.Lab is looking at to do its pilot DNA barcoding project with, it might come in handy in the future, and the opportunity to build one was hard to resist. 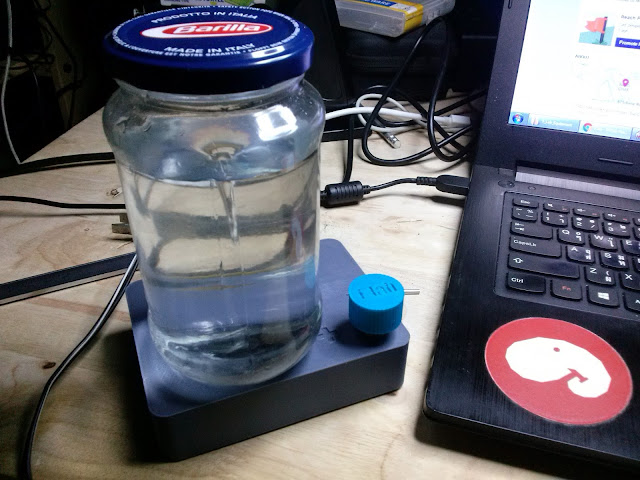 That opportunity came in the form of a month-long series of free workshops organized by Hermes Huang from DSIL (Designing for Social Innovation and Leadership). Hosted at Fab Cafe Bangkok, and funded by the OSHW Project (oshw.honf.org) of the OCSDNet as part of a wider research project, the first workshop in the series had attendees build and walk away with a simple but functional magnetic stirrer built from a computer fan, rare-earth magnets taken from old hard drives, a 10k potentiometer, and a 9V battery.

The tutorial used can be found here on Hackteria.

Hermes hopes that the stirrers from last week, and upcoming projects later this month, will end up modified, explained to others, and spread out across a growing ecosystem of open source tools and knowledge. He said specifically:


I'm hoping that these workshops inspire people to think differently about the way they learn science, and also about recycling electronics, meeting new and different people, and about finding creativity in everything.

This series of workshops holds a lot of implications, and hopefully will be replicated and expanded upon by other makerspaces in Bangkok and beyond in the months to follow.

One of these stirrers ended up the very next day at Maker Zoo, where  the 9V battery was replaced by a 12V DC adapter, the basal wood platform replaced with a custom designed and 3D printed case, and all the twisted wire connections permanently soldered into place. The result is F.Lab's first piece of DIYbio equipment, a magnetic stirrer capable of being used reliably everyday, and also capable of being upgraded further in the future.

The current upgrade uses a section of steel nail that was clipped to about 10mm in length, placed in a tomato sauce jar. Through experiments with various kinds of containers laying around, it is clear that the thinner and flatter the container, the better the results. It is also clear that by pulsing the power, even unstable containers can be used. However, currently, the stirrer still uses a manual potentiometer. In the future, a microcontroller could be programmed to go through several different modes, including half-power, full-power, and pulsed-power.

Ideally, connecting the stirrer to a networked lab would be the final destination for this piece of equipment. Then, you could pick a protocol and have each machine automatically set in sequence to carry it out. LEDs could even indicate which machine to go to next as one works through the lab protocol.

It's Never Been This Easy...

3D printing and a growing number of makerspaces in Bangkok, along with people like Hermes organizing workshops and passing out open source ideas, knowledge, and designs, makes it possible to take a proof-of-concept prototype from a Sunday evening workshop, and turn it into a fully functional piece of lab equipment on Monday.

The second weekend of November, Hermes will be organizing a workshop to build microscopes, a microtome for the third week, and then a turbidity meter for the final week. They are free, taught in English and Thai, and as can be seen from the first week, highly useful with lots of implications and possibilities that follow. If you're interested, contact Fab Cafe, Bangkok via Facebook or their website here, or just drop by their space near Ari BTS station each Sunday.

If you're interested in learning more about the 3D design and printing process that made the subsequent stirrer upgrade possible, check out Maker Zoo (website here) where they regularly hold workshops and publish the 3D designs on Thingiverse for others to freely download and print out on their own.

F.Lab will eventually be putting together other pieces of equipment, and once 2-3 are built and the bugs worked out for each, networking them together will come next. All of it will be documented either by Maker Zoo or F.Lab, or hopefully, both.