When Designers Do Production

April 30, 2016 | via ProgressTH The division of labor has dominated the modern economic paradigm for quite some time, in fact, some would argue since around the beginning of the Industrial Revolution and maybe a little bit before it even. 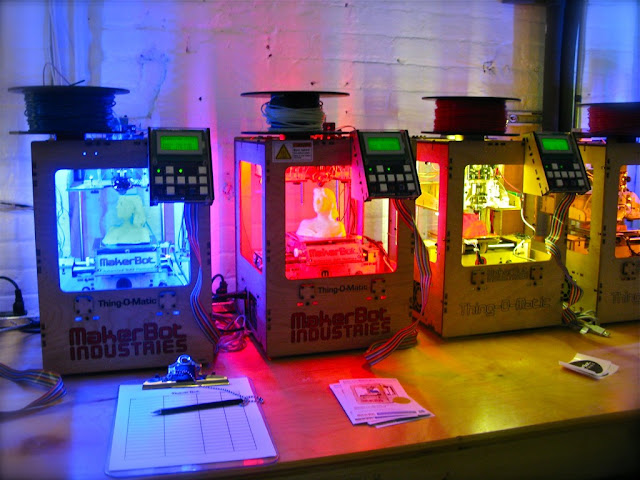 In a single lifetime, one could have conceivably seen a time when designers were divided into drafters, renderers, and model-makers, and of course, designers would take whatever it is they created, and pass it on to either a manufacturer, a prototyping shop, or a contractor.

With the computer revolution, design software streamlined and improved the speed and efficiency of the entire design process. Often creating plans, a 3D model, and renders could be done within the same software suite. The design would still be passed on to people bending metal, molding plastic, cutting wood, or otherwise taking it from the digital world, and building it in the physical world.

Today, with the advent of affordable and accessible personal manufacturing technology (CNC laser cutters, routers, and water jets, as well as 3D printing) designs can go from digital to physical inside the same studio, overseen by the very designers who created them. The division of labor that has defined at least the design world is looking more like a coming convergence.

Inside a Makerspace: Designers Who Do Production

A makerspace is a living prototype of a combination of ideas and institutions that may come into their own at any time in the near future. A makerspace hosts a wide variety of people with an equally varied type of skillsets. Most could be described as designers, even if they themselves don’t consider themselves to be. And of course, whether they are soldering circuits together, 3D printing, or using any number of computer controlled cutters, mills, or lathes, they are all doing production of one kind or another.

Most of this involves prototyping, but increasingly it is becoming short-run production where a couple to a few dozen items might be produced in-house before they are outsourced for larger-scale production. But for those makerspaces who also host 3D printing services, small-run production is becoming a steady source of revenue -- a constant production process despite the variety of the items being produced and the small scale at which they are produced.

It is far from a complete convergence between design, prototyping, and production, but it is a step on a journey that inevitably ends with such a convergence. The obstacle is the limitations of personal manufacturing technology makerspaces and design studios can afford. With microfactories, however, larger production runs are possible, and many makerspaces already are teetering at the edge of being microfactories.

In a future where microfactories can meet local demand, and local demand is always met by a microfactory, the need for large scale mass production will diminish. This is when we may see a convergence in industry where small groups of people have multiple skillsets and are involved in all aspects of designing, prototyping, and producing.

What are Makerspaces Making Now?
To give some examples of this convergence, we can look at a few examples where makerspaces are not only designing and prototyping, but also producing. Not only are they producing, they are doing so in a manner that traditional production could not for customers who could otherwise not afford to realize their ideas and products any other way.


A musician based in Pattaya, Thailand, also makes his own headless bass guitars for clients. His production doesn’t require a huge factory floor, and he sells a small volume per month. With his guitars being headless, he designed a cap to cover the strings that would be protruding from the tuning mechanisms. He believe 3D printing could be the answer and he was right.

Traditionally, he’d have to pay a designer to draft the concept and dimensions, a prototyping studio to create an example, then bring that example to a factory that would require a large minimum volume before creating the tooling to manufacture them. If anything about the design needed to be changed, that initial minimum volume would represent a complete waste of resources.

With a makerspace, the cap could be designed, a prototype made and tested, and small batches of 2-3 or 5-10 made at a time and shipped to him from Bangkok with incremental changes made in between each batch.

A similar scenario faced a Singapore-based company that is developing an interactive tablet application and required customized cases for their tablets. During the development process, the brand and dimensions of the tablets used changed multiple times meaning that if a case was ordered from a factory with a minimum volume, dozens, or perhaps hundreds of cases would have gone unused and the money used to produce them wasted. With 3D printing at a makerspace, the design iterations from case to case took literally just minutes to make, and new cases could be printed each time one was required.

There are a few missing pieces to an ideal convergence. Entrepreneurs even today could invest in their own 3D printer and invest some time in learning a 3D design program like SketchUp to handle the design and production of short-runs themselves. Makerspaces of course, could take on the role of entrepreneurs (and many already do) meaning they don’t need to rely on clients using their 3D printing service because they’d be too busy prototyping and producing their own ideas to sell.

3D printers and other forms of personal manufacturing still need to advance a bit more to handle larger scales of production -- not quite reaching mass production, but to move a bit beyond the couple dozen to a hundred a makerspace could probably make today of any given idea.


Tel Aviv Makers International (TAMI) designed and produced their own ATTiny microcontroller board. They designed every aspect themselves, prototyped and tested it, and even assembled a small-run of the boards themselves. They were unable to etch the boards themselves, however, which required them sending it off to a production house that hands the scale they were targeting.

TAMI’s development board is an example that teeters on the edge of this convergence. In the near future, personal manufacturing might extend to the production of electronics, allowing hackerspaces like TAMI to cross over completely.

Eventually, be believe this will lead to another transition, one toward a post-scarcity or near-post-scarcity paradigm. But before that, there must be an intermediary period and we believe that period is this “convergence of labor.”