June 25, 2016 | BIT Magazine Gene therapy has placed humanity at the threshold of curing some of the most common and serious diseases that have plagued us throughout history. Everything from cancer and diabetes, to hemophilia, blindness, and deafness have found themselves vulnerable to this new method of turning our own genetic code, cells, and body against that which ails it. 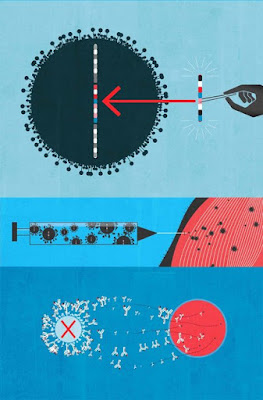 Many of these therapies are being taken through clinical trials, others are already entering the market.

But this did not suddenly happen overnight. It happened after decades of publicly funded research performed within institutions around the world by dedicated teams of doctors, scientists, and researchers.

The headline-grabbing cures now entering the market via pharmaceutical corporations trace their development back to publicly funded research. The US National Institutes for Health (NIH) is in fact, quite proud that the research it funds results directly in new patents for pharmaceutical and biotechnology firms. This happens to be the subject of an entire paper funded by the US National Science Foundation (NSF) titled, "Public R&D Investments and Private-sector Patenting: Evidence from NIH Funding Rules."

The paper's conclusion, in part, claims:

It also points out that:


One rough calculation (based on all patents associated with marketed drugs) suggests that $1 dollar in NIH funding generates around $1.40 in drug sales.

No one is suggesting that private industry does not bring any benefits to the table, It was the business model required for the socioeconomic system we've existed within for decades. However, pharmaceutical and biotechnology companies now are apparently taking advantage of the public's unfamiliarity with both the role public funding factors into R&D, as well as the entire notion of gene therapy in general.


With headlines accompanying fantastic stories of effective gene therapy cures, eliminating conditions permanently often with a single injection, have also come headlines explaining that the cost for these single shots may be as high as "1 million dollars." It is often insinuated that this is to recuperate the costs of developing the therapies or that they may even cost that much to produce (they don't), but if the therapies are being developed from publicly funded research, that may not entirely be true.

What should be done about this?

It is likely that if the general public was more aware of just how effective NIH funding was in producing life-saving discoveries and knew the full implications of gene therapy, there would be significant support to provide the NIH with more funding to in turn, accelerate and broaden this work further.


It is also likely that a more aware general public would find a 1 million dollar price tag for gene therapy that does not cost even a fraction of that to produce and that was developed using public funding, unacceptable,

Pharmaceutical and biotechnology companies probably correctly believe that there is a window of opportunity within which they can make massive profits with exorbitant prices before other competitors and alternatives are developed. They probably are also banking on intellectual property arrangements that will artificially keep this window open even longer.

However, unlike the decades past where pharmaceutical giants grew into their present proportions, technological innovation is moving at a pace that could slam that window shut sooner than expected.

This can happen for a number of reasons even before technological innovation makes it inevitable.

Governments like China and India with significant resources but even larger populations, may not be willing to pay a million dollars for cures that will essentially eliminate entirely (rather than just reduce) the burden of various, now curable conditions, upon their national healthcare systems. Maximizing profits for them will not be nearly as desirable as reducing budgetary burdens on their healthcare systems while improving the health and economic competitiveness of their populations.

They will have the ability to produce gene therapies themselves for a fraction of the cost offered in North America or Europe sooner than many realize, making the current attempt to overprice gene therapy untenable.

Instead, what prominent pharmaceutical and biotechnology companies should do is seek an arrangement not entirely unlike NASA's COTS (Commercial Orbital Transportation Services) program. This is where public funding is used to develop new innovations and eventually to purchase the final outcome for regular use toward achieving NASA objectives.

What if the NIH did something similar, providing more funding to not only research and develop gene therapies, but also to eventually purchase a viable outcome for use across public healthcare systems? What if the technology was opened up as NASA and companies like SpaceX are doing? What if objectives rather than profits took precedence with profits fitting in only to facilitate the former?

What could emerge is a more reliable and sustainable business model for companies involved. And if larger, established players in the industry are disinterested, newcomers may take their place and eventually displace them as human healthcare shifts from relatively ineffective pharmaceuticals and therapies toward the permanent cures offered by gene therapy.

Of course, after gene therapy successfully cures many diseases, less profit will remain for companies involved. But then again, with the exponential advance of technological progress, the ability for humanity to do more with less and the ability for fewer to do more for themselves than depend on traditional business models is all but inevitable.

And in a future where diseases are cured, and everyone has access to anything they may want, a post-scarcity paradigm essentially, why would you want to be the head of a large corporation holding cures over the heads of ordinary people for 1 million dollars in the first place?